THE POTENTIAL abolition of stamp duty in Australia has been proposed and discussed for at least a decade, but recently there have been fresh calls from many corners to do away with the property tax.
Economists in particular – starting with Ken Henry way back when he authored and delivered his Henry Tax Review in 2009 – have been pushing for stamp duty to be abolished, arguing that now is an opportune time to make major structural tax reforms to support the economic recovery post COVID-19.
If abolished, the most common suggestion is that stamp duty would likely be replaced by a broad-based land tax on real estate owners to be paid annually and/or an increase in the GST, although the Federal Government has indicated it is opposed to the latter.

Why should stamp duty be abolished?

Inefficient, bad, lazy, archaic… these are just some of the words used to describe stamp duty. Dr. Henry has called it a ‘diabolical tax’ and labeled it one of the worst taxes in Australia.
The fact is that stamp duty was established in the early 19th century, when documents for the transfer of a home needed to be officially stamped to make them legally binding, and governments took the opportunity to ensure people paid taxes at the time.
But while this worked in the olden days, it’s not relevant now with our systems far more sophisticated.
There has also been no indexing over time, despite prices rising significantly over recent decades, which has resulted in huge stamp duty hikes and of course government revenue.

How much does stamp duty raise?

Domain figures show stamp duty on a median-priced home in New South Wales grew by 102% between 2004 and 2019 to reach $42,269, 183% in Melbourne to hit $44,164, and 189% in Brisbane to reach $11,013.
Governments like stamp duty because it can provide strong revenue to state and territory budgets, but the downside is that this revenue can be volatile, reliant on a strong property market and consistent transaction levels. 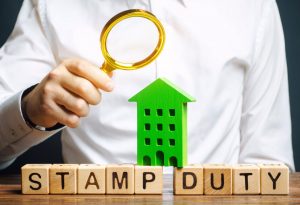 If transaction levels fall due to an economic downturn or a dive in confidence, so too does stamp duty revenue for governments, which can leave big holes in budgets from year to year.
For example, stamp duty revenue in NSW was $9.7 billion in 2016-17, but fell 24% in 2018-19 to $7.4 billion.

Could a broad-based land tax be an option?

In contrast, taxing land through a broad-based land tax, charged annually by sending a bill to everyone who owns land (a proportion if an apartment), would provide a much more consistent source of revenue over time.
Property Investment Professionals of Australia Chairman Peter Koulizos says an annual land tax would be better for state and territory governments by providing more regular income.

“The problem for state government is when the property market is booming so are their coffers – and generally revenue from property is the second highest income-earner after payroll tax – but in situations like COVID-19 revenues dive,
Getting a regular land tax from all property owners is going to be much better for them to budget.”

The other major issue with stamp duty is that because it’s a massive impost on a single transaction – it could be $40,000 or $50,000 on top of a property purchase, particularly in Sydney, for example – it impacts economic decision making, often in a detrimental way, with people less inclined to buy or transact.
In particular, it can act as a barrier or deterrent to home buyers, particularly first homebuyers, who have to save both a deposit and then more for stamp duty, or add it to their mortgage, which will cost them more over time.
But it also leads to an inefficient use of housing as people become more reluctant or are unable to move – including to upsize or downsize – as they have to pay the huge cost of stamp duty each time, which makes it too expensive. 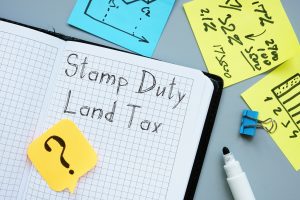 This results in people living far from work opportunities or their children’s schools, or people living in homes far too big for them as they shy away from downsizing, which also prevents that larger housing being freed up for families that need it.

How would the abolition of stamp duty work?

New South Wales and Victoria are currently talking about doing away with stamp duty, while the Australian Capital Territory has been the only state or territory in Australia to actually do so, starting the process back in 2012.
The ACT is phasing stamp duty out under a 20-year plan, gradually reducing stamp duty rates and replacing it with higher annual rates or a land tax-style property rate.
While this can lead to a situation where people are paying both stamp duty on a purchase and an annual property tax over time (ie. being double-taxed), thereby also ensuring the government’s revenue remains fairly stable, it’s not the only way to do it.
The other way is to abolish stamp duty straight away, and apply a land tax to purchases from a certain date, exempting people who already own a house and have paid stamp duty. This, however, could leave a hole in state or territory budgets for some time.

What are the potential disadvantages of abolishing stamp duty?

This issue of how stamp duty would be abolished and what is would be replaced with is the major potential downside, with the devil in the detail of how the plan would work.
One concern is that these annual land tax bills would have to be very sizeable to replace stamp duty, with one Deloitte Access Economics model estimating the average property would have to pay $2400 per year, but of course, many properties valued at higher rates could pay up to five times as much.
And who would stop governments from upping these rates regularly, so that people end up paying much more over time?
According to the Property Council, the ACT’s approach was supposed to be revenue neutral for the government but in actual fact the revenues from property taxes are now higher.
A HIA report from the start of 2018 found the switch from stamp duty to land tax in the ACT has resulted in additional property taxes of $196.5 million, an increase of 38% over four years.
Koulizos hasn’t made up his mind about whether abolishing stamp duty is the right way to go, but isn’t a big fan of another annual financial impost on home buyers or owners, on top of council rates, insurances and water bills.

“I’m particularly concerned for people on fixed incomes or pensioners – once you get to 65 or 70 it’s another impost you have to keep paying until the day you die.”
Peter Koulizos Chairman, Property Investment Professionals of Australia

There are suggestions land tax bills for older people could be paid upon the sale of the property upon their death, but the bill of course still has to be paid.

So, will it happen?

While there is a lot of talk about the abolishment of stamp duty, whether or not it will actually happen remains to be seen.
Governments are very dependent on the huge revenue generated from stamp duty, so moving away from that will prove to be difficult.
Personally, I feel we should try our utmost to move away from this lazy tax that limits a workforce from moving to where the jobs are.
But it’s going to be very tricky politically to convince voters that replacing stamp duty with an annual charge on land is a good idea.
Let’s watch this space!
Source: Tyron Hyde, Stamp Duty or Land Tax?