Grace Rummery managed to put away a whopping $20,000 in just six months without noticing after making one simple but major change.

Grace Rummery and Will Miller bought their first home in January. Source: Supplied

Grace Rummery and her partner Will Miller weren’t even thinking about buying a house — until their dream property turned up almost by accident.

Ms Rummery, a landscape architect, and Mr Miller, a real estate agent, have a combined income of approximately $100,000.
After moving from Sydney to Orange last April, they soon realised their savings were piling up far more quickly than it had during their stint in the NSW capital.
At one point, Ms Rummery, 26, was also working two jobs as her career transitioned along with her treechange — and within just six months, she had $20,000 sitting in the bank. Then, shortly before Christmas, the perfect property turned up — and with a bit of help from Ms Rummery’s parents, the young couple were ready to pounce.
They ended up paying $400,000 for their 640sq m, three-bedroom, one-bathroom home in January, with a 10 per cent deposit made up of Ms Rummery’s own savings and a gift from her parents. Grace Rummery and Will Miller bought their first home in January. Source: Supplied

“I was just putting money away after moving to Orange and I had $20,000 within six months of living here — my tax refund came back and then with a combination of other things I ended up with that money,” she said.
“We knew we wanted to buy one day, but not so soon. The pair rustled up a deposit from their savings and with a little help from Ms Rummery’s parents. Picture: Supplied

“But saying that, in Orange it’s just so easy to save and the right house just came up.”

Ms. Rummery said the couple had originally moved in with Mr Miller’s parents who lived in the area before renting their own place.
They had gone to a few open houses before ending up on real estate listing emails, which is how they stumbled on their dream home a fortnight before Christmas.
“We saw it and put in an offer straight away, which the owners accepted, so we had to try and organise our finance over the Christmas period when we had no intention of buying a house,” she said.
“It was just a really simple 1960s red brick home in the style of architecture we wanted for a really good price.”
Ms. Rummery said while the couple were now working in the same fields with similar incomes as they had in Sydney, but that the cost of living in Orange was so much lower in comparison that it made saving “extremely easy”.
She said moving to the country also came with a range of lifestyle benefits — including a very welcome lack of traffic — and urged other young people dreaming of buying their first homes to consider moving away from Australia’s notoriously pricey capital cities if possible.
“In Sydney our living expenses were so high — I lost $300 a week in rent plus public transport, but it’s so much cheaper to rent in Orange,” she said.
“The circumstances were right for us to move out of the city so it was a really good option for us, but it might not be for everyone.” 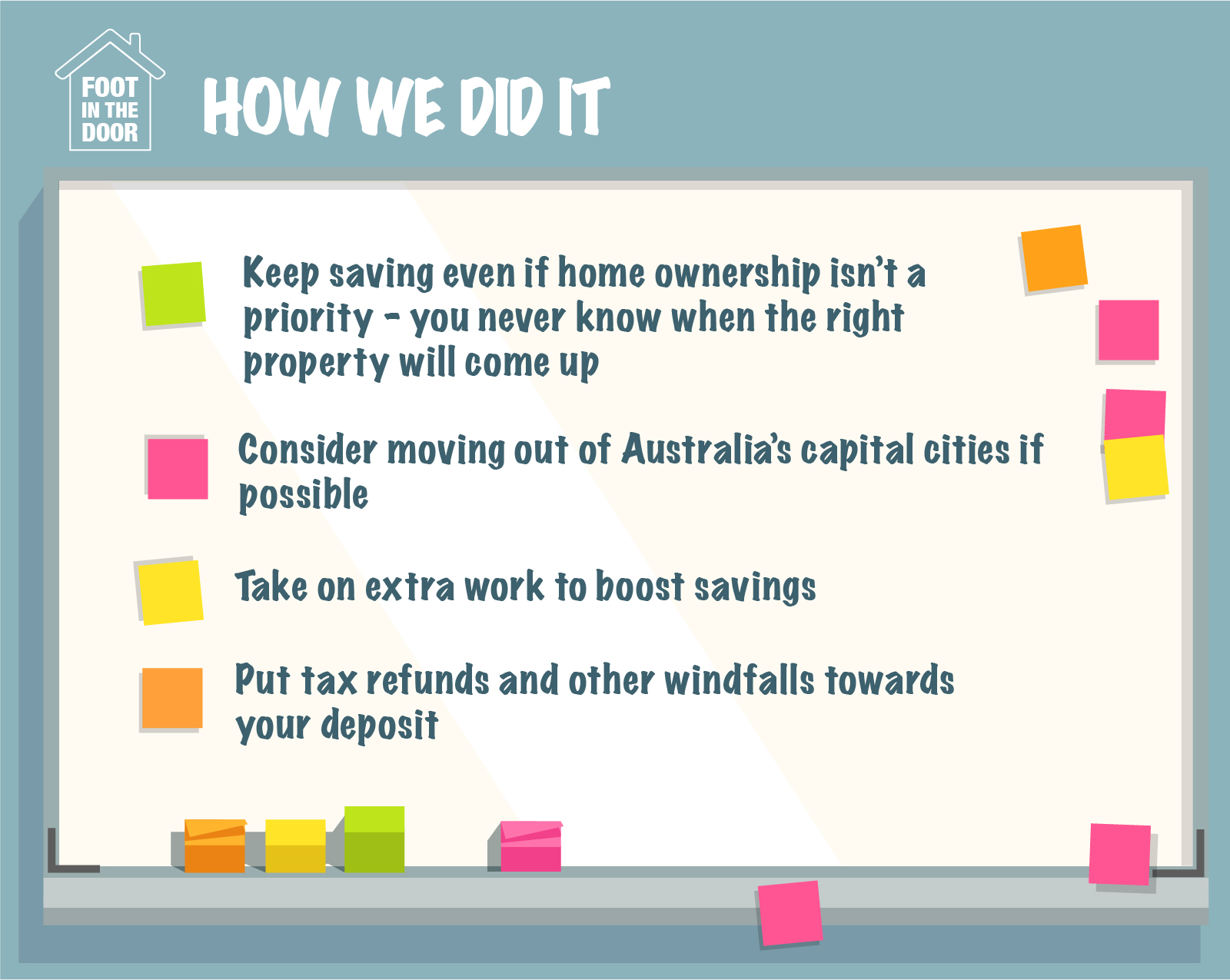 But while Ms. Rummery described the buying process as “smooth sailing”, Scott Rudgley, sales director at property company AD Group, said the couple’s situation was fairly unique, as most first home buyers were not snapping up property in regional areas.
He said in NSW at least, many first home buyers were taking advantage of government incentives such as the First Home Owner Grant (FHOG) scheme, which provides a $10,000 grant for eligible buyers of new properties worth up to $600,000.
Meanwhile, stamp duty is waived for all new and existing homes valued up to $650,000 and with stamp duty on properties above $650,000 reduced on a sliding scale.
“These government incentives, together with properties becoming more affordable and additional incentives from developers, means we’re seeing a surge of activity from first home buyers on both our Apartment Developments and House and Land Developments websites,” Mr Rudgley said.
“We are finding that the medium and high-density areas of Sydney are driving more inquiry with apartments and the northwest and southwest corridors proving more popular for houses. “It’s rare for first home buyers to move to the country but great to see for the regional economy.”